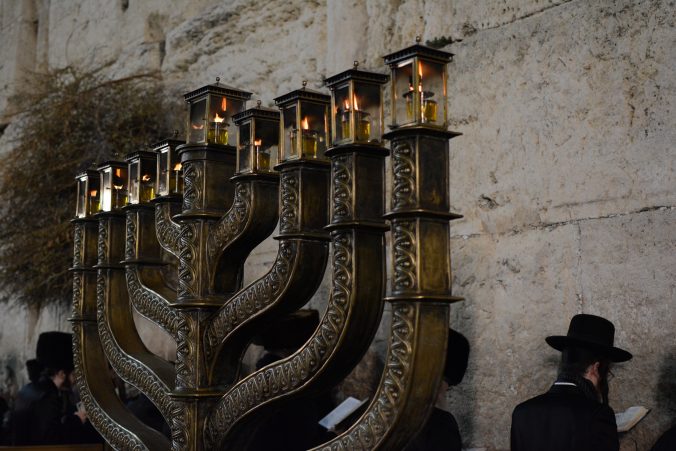 8 Nights in G-d’s Light, a Message of Hope During Hanukkah

Sometimes the world seems so dark and the future so bleak.

It feels like we are so small and the rest of the world will overlook every truth and everything we do right just to say we are wrong. They will side with our enemies. No matter how much pain and suffering they cause, no matter how horrible their true essence is.

But while I was feeling pretty down about this cold and depressing truth, I realized that Hanukkah is coming up. And I wonder, what it must have been like for the Jewish people who lived during that time. It must have been so much worse than what we suffer through today. This was a time when the Greeks sought to impose their Hellenistic ideas. While Judaism, on the other hand, emphasizes truth and moral purity, as commanded by G‑d in the holy Torah, the Greeks held outward beauty as ideal.

The king, Antiochus IV, was described as being very harsh and cruel. By suppressing all Jewish laws, he hoped to get rid of the individualism of the Jews and to unify his kingdom with a common religion and culture. During this time even the position of the High Priest was decided by the king.

When a rumor spread that Antiochus and been killed in war, the Jewish people rebelled. However, he had not died and when he returned, he ordered his army to fall upon the Jews. Thousands of Jews were killed.

A series of harsh decrees were enacted against the Jews. The scrolls of the Law were confiscated and burned, Jewish worship was forbidden. Circumcision was forbidden. Even Sabbath rest and kosher dietary laws were prohibited under penalty of death.

Thousands of Jews sacrificed their lives for the sake of the Jewish religion.

The army went from town to town and forced the inhabitants to worship pagan gods. In the end, only one refuge remained in the hills of Judea with their caves. But even there the Jews were pursued, and many died a martyr’s death.

And yet these very Jews who suffered extreme persecution had hope. They carried on and they spread their light to other Jews and bonded together as one nation. And in the end, they had G-d, and that was all they needed. They pressed on, and they won. Against all odds. Unfortunately, though, the darkness continued. Just because the Temple was won back and the anti-Torah decrees rescinded, the Syrian-Greeks and their Hellenistic allies remained powerful. Another 25 years of fierce battles ensued until the land was totally free.

But G-d gave us the miracle of the cruse of oil lasting 8 days, instead of 1. It was just a brief moment of G-d saying I am still with you. In a way, it was a little wink from G-d. Him saying that things will be bad again for a while, but I am still with you. And this is all we need. If G-d is with us, then no matter what, everything will ultimately be ok.

Sometimes in life, there are people who have bad things happen but then everything gets better. Sometimes though, for some, things never seem to get better.

This has been our history. The world is a dark place. And I’m not sure if it has ever been easy for us Jews. But even with just a little bit of light, we can keep walking on through the darkness.

And so we must keep this light with us and walk on. Raise our voices, and bound together as one nation. We must fight the fight, knowing that Hashem is with us always, and everything will be alright. Alternatives to Airbnb | Why You Should Use Another Vacation Rental Site

Proud to be a Jew